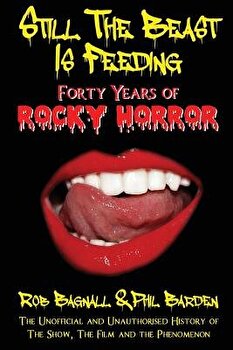 Still the Beast Is Feeding: 40 Years of Rocky Horror/Rob Bagnall


Description Born in a tiny attic theatre on a dark and stormy night in the Summer of 1973, The Rocky Horror Show was an immediate hit with audiences and critics alike, and a much-needed shot in the arm for London's jaded theatre-scene. Four decades on, Richard O'Brien's hilarious cross-dressing tribute to trashy B-movies, '50s sci-fi, sexual liberation, gothic horror and rock 'n' roll has been seen in over 30 countries and translated into more than 20 languages, and it continues to pull in the crowds and attract legions of new fans, while the 1975 film version - now the longest continually playing theatrical release in cinema history - generated an unparalleled cult following which took the concept of audience participation to unheard of levels of immersive enthusiasm. Exhaustively researched, this book chronicles the extraordinary history, continued evolution and enduring legacy of this immortal tale of a sex-crazed transvestite scientist, extra-terrestrial subterfuge, corruption of the innocent and the creation of life. Incorporating a wealth of archival material, personal memories and new interviews with contributors and participants from every era of Rocky Horror history, the authors explore the show's origins and influences; the creation of the original London stage production; the numerous national and international revivals; the making of the movie; and the fanatical fishnet following which continues to define the Rocky Horror experience. So, 'throw open the switches on the Sonic Oscillator', and celebrate a monstrous musical milestone as The Rocky Horror Show turns 40.

Rhythm in the Rain: Jazz in the Pacific Northwest, Paperback/Lynn A. Darroch

Down the Rhodes: The Fender Rhodes Story/Gerald McCauley