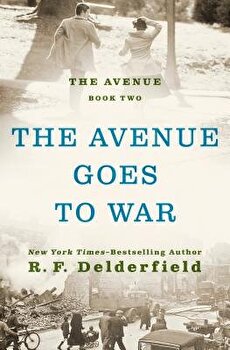 
The residents of a South London street face World War II together in this novel from the New York Times -bestselling author of The Dreaming Suburb . Years ago, the Great War tore apart the lives of the families living on Manor Park Avenue in South London. Now, as Allied and Axis armies rage across Europe in an even more devastating conflict, the residents of the Avenue struggle to cope with the sacrifices England must make as their nation's place in the world irrevocably changes. Longtime homeowner Jim Carver, who lives in Number Twenty, had his fill of combat in the trenches of France more than twenty years ago. But when the Luftwaffe rains death from above on his beloved street, he dedicates himself to the war effort. Carver's eldest son, Archie, has come a long way from grocer's errand boy to owner of a chain of successful shops. His illicit affair with a neighbor whose husband is fighting for King and Country threatens to undo everything he has achieved. Esther Frith lives a solitary life in Number Seventeen, seemingly oblivious to the aerial onslaught ravaging the Avenue now that the war has turned her family into casualties. And across the road at Number Twenty-Two, reclusive Harold Godbeer hates what the war is doing to his country. He realizes that even if England succeeds in helping defeat the Axis's tyrannical dictators, his nation will be but a shadow of its former glory. Living side by side as their neighborhood becomes a battleground, two generations of Manor Park Avenue must unite if they--and their way of life--are to survive during wartime, in this moving novel about the connections we forge during times of trouble, which was also adapted for British television. About the Author: R. F. Delderfield (1912-1972) was born in South London. On leaving school he joined the Exmouth Chronicle newspaper as a junior reporter and went on to become editor. He began to write stage plays and then became a highly successful novelist, renowned for brilliantly portraying slices of English life. With the publication of his first saga, A Horseman Riding By , he became one of Britain's most popular authors, and his novels have been bestsellers ever since. Many of his works, including the Horseman Riding By series, To Serve Them All My Days , the Avenue novels, and Diana , were adapted for television.