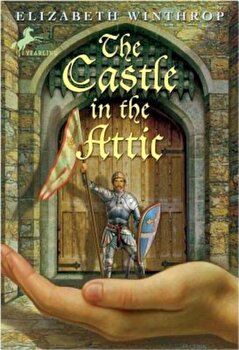 The Castle in the Attic, Paperback/Elizabeth Winthrop


One of the classic fantastical adventures of all time William has just received the best present of his life--an old, real-looking stone and wooden model of a castle, with a drawbridge, a moat, and a fingerhigh knight to guard the gates. It's the mysterious castle his housekeeper has told him about, and even though William is sad she's leaving, now the castle is hisWilliam can't wait to play with the castle--he's certain there's something magical about it. And sure enough, when he picks up the tiny silver knight, it comes alive in his handSir Simon tells William a mighty story of wild sorcery, wizards, and magic. And suddenly William is off on a fantastic quest to another land and another time--where a fiery dragon and an evil wizard are waiting to do battle. . . . An IRA-CBC Children's Choice A California Young Reader Medal Winner A Dorothy Canfield Fisher Children's Book Award Winner

Jack and the Beanstalk, Paperback/Steven Kellogg

No Biting! 'With 1 Full Page of Stickers', Paperback/Karen Katz

No Small Potatoes: Junius G. Groves and His Kingdom in Kansas, Hardcover/Tonya Bolden

42 Is Not Just a Number: The Odyssey of Jackie Robinson, American Hero, Hardcover/Doreen Rappaport

You Can't Bring a Sandwich to the Moon . . . and Other Stories about Space!: Space Age, Hardcover/Laurie Calkhoven

Eye: How It Works, Paperback/David Macaulay