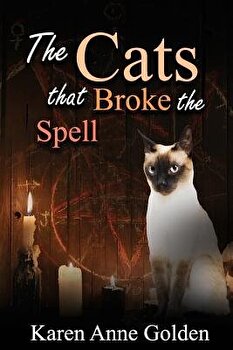 The Cats That Broke the Spell, Paperback/Karen Anne Golden

When a beautiful professor is accused of being a witch, she retreats to her cabin in the woods. Soon a man dressed like a scarecrow begins to stalk her, and vandals leave pentagrams at her front gate. The town of Erie, Indiana has never known a witch hunt, but after the first accusation, the news spreads like wildfire. "She stole another woman's husband, then murdered him," people raged in the local diner. "She uses her black cats to cast spells to do her evil deeds " But what do the accusers really want? How is Erie's crime boss involved? In the meantime, while the pink mansion's attic is being remodeled, Katz, Jake and their seven cats move out to a rural farmhouse, which is next door to the "witch." They find themselves drawn into a deadly conflict on several fronts. It's up to seven extraordinary felines to unravel the tangle of lies before mass hysteria wrecks the town. Murder, mayhem, and a cold case make this book a thrilling, action-packed read that will keep you guessing until the very end. About the Author: Karen Anne Golden currently lives the dream of restoring a Queen Anne Victorian home. The house was her obsession when she left the workplace in Manhattan and moved to a small town in Indiana. With the house now finished, she has time to do what she's always been passionate about: writing. -The Cats that Broke the Spell- is the eighth book of -The Cats that . . . .- Cozy Mystery series. Karen received a bachelor degree in History/Education from Columbus College, Columbus, Georgia and an advanced degree in Anthropology from Purdue University, West Lafayette, Indiana. While living in NYC, she worked in the computer industry. The author has rescued many cats in the town she lives in. She's an avid cat and pet lover. She shares her home with her husband, several Siamese, Ginger and Tabby cats, and a tortoise shell cat named Ruby. Many of the cat scenes in the book are based on her own cats' antics.