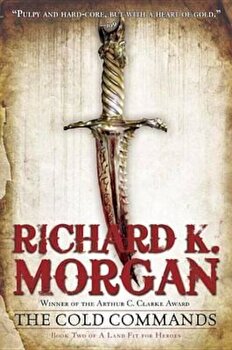 Awards ? Finalist (2012) - Spectrum Awards - (Novel) Contributor(s): Author: Richard K. Morgan NAMED ONE OF THE BEST BOOKS OF THE YEAR BY Kirkus Reviews - Fantasy Book Critic "Pulpy and hard-core, but with a heart of gold."--io9 The otherworldly Kiriath once used their advanced technology to save the world from the dark magic of the Aldrain, only to depart as mysteriously as they arrived. Now one of the Kiriath's uncanny machines has fallen from orbit, with a message that humanity once more faces a grave danger: the Ilwrack Changeling, a boy raised to manhood in the ghostly realm of the Gray Places. Wrapped in sorcerous slumber on an island that drifts between this world and the Gray Places, the Ilwrack Changeling is stirring. When he wakes, the Aldrain will rally to him and return in force. But with the Kiriath long gone, humankind's fate now depends on warrior Ringil Eskiath and his few, trusted allies. Undertaking a perilous journey to strike first against the Ilwrack Changeling, each of them seeks to outrun a haunted past and find redemption in the future. But redemption won't come cheap. Nor, for that matter, will survival.