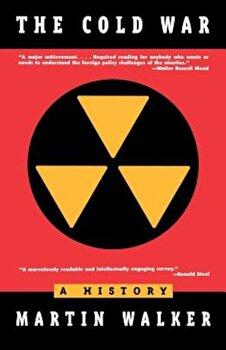 
"The history of the Cold War has been the history of the world since 1954." So begins this wide-ranging narrative by award-winning political commentator Martin Walker, which is the first major study of the Cold War. Now that it is over, it is crucial to our future to understand how the Cold War has shaped us and, especially, to recognize it as the economic and political dynamic that determined the structure of today's global economy. From the origins of the Marshall Plan, which revived Europe after World War II, and the strategic decision to rebuild a defeated Japan into a bulwark against China to the collapse of the Berlin Wall, this authoritative work reveals how the West was built into an economic alliance that overpowered the Soviet economy while also unleashing global economic forces that today challenge the traditional nation-state. The Cold War was more of a global conflict than was either of this century's two major wars; far more than a confrontation between states or even empires, it was, as Martin Walker puts it, "a total war between economic and social systems, an industrial test to destruction." Walker reminds us how easy it is to forget that there were many occasions for the late 1940s on when victory seemed far from assured, and that lent a particular urgency to the efforts of postwar Western leaders. The West continued to be alarmed by the prospect of defeat right up to the Soviet empire's last breath. At the end of the 1940s the fear was generated by communist expansion into Eastern Europe and China; in the 1960s by the prospect of defeat in Vietnam. In the 1970s the failure of detente and the West's economic crisis brought a new generation of dedicated anti-Communists to prominence. For more than forty years, as this detailed analysis makes clear, the outcome of the Cold War was in doubt. We also come to understand how the arms race caused new alignments and shifts in domestic power. As the United States became the national security state, California, which had a population of five million at the start of the Cold War, grew to thirty million and, by the 1980s provided one in every ten members of Congress and two presidents. Using newly opened Kremlin archives and his own experiences in the field, Martin Walker has written a brilliant analysis of the conflict that has shaped the contemporary world.