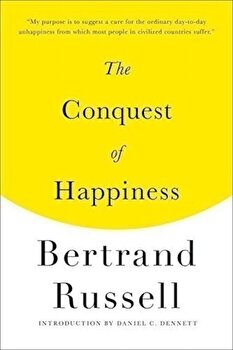 The Conquest of Happiness, Paperback/Bertrand Russell


In The Conquest of Happiness, first published by Liveright in 1930, iconoclastic philosopher Bertrand Russell attempted to diagnose the myriad causes of unhappiness in modern life and chart a path out of the seemingly inescapable malaise so prevalent even in safe and prosperous Western societies. More than eighty years later, Russell s wisdom remains as true as it was on its initial release. Eschewing guilt-based morality, Russell lays out a rationalist prescription for living a happy life, including the importance of cultivating interests outside oneself and the dangers of passive pleasure. In this new edition, best-selling philosopher Daniel C. Dennett reintroduces Russell to a new generation, stating that Conquest is both a fascinating time capsule and a prototype of the flood of self-help books that have more recently been published, few of them as well worth reading today as Russell s little book. "

The Rest of Her Life, Paperback/Laura Moriarty

The Full Spectrum: A New Generation of Writing about Gay, Lesbian, Bisexual, Transgender, Questioning, and Other Identities, Paperback/David Levithan

The Last Summer (of You and Me), Paperback/Ann Brashares

Clothes On Their Backs, Paperback/Linda Grant

The Rise of the Resistance: Phoenix One, Paperback/Jackie D

Chasing Kismet: The Journey of an Indo-Canadian Girl Who Sets Out to Discover Her Roots, But Becomes Uprooted Instead, Paperback/Amrita Lit