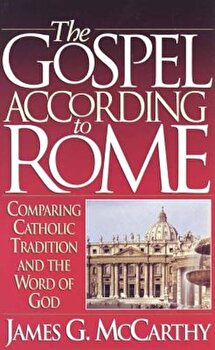 The Gospel According to Rome, Paperback/James G. McCarthy


When Catechism of the Catholic Church broke onto the N.Y. Times bestseller list, its astonishing success confirmed the overwhelming interest of Catholics and Protestants in understanding modern Catholicism. Has the recent openness among denominations affected Catholic teachings? In the new spirit of cooperation, is there any reason why Catholics and Protestants should remain divided? This powerful and insightful examination of the Catholic Church provides: a side-by-side comparison of Scripture with the first new worldwide Catholic catechism in 400 years a summary of how modern Catholicism views grace, works, and heaven 24 ways the Catholic plan of salvation still stands in contrast to biblical truth a balanced overview of how the authority structure of the Roman Catholic Church compares with that of the New Testament church an explanation of how participation in the Mass and other sacraments is inconsistent with faith in Christ as Savior Clear, accurate, significant information to know and share-- The Gospel According to Rome

The Gospel Of Loki

The Gospel Of Buddha