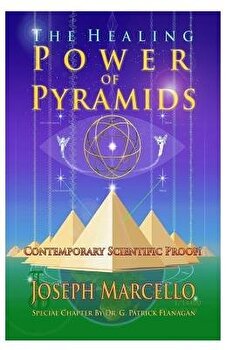 
Contributor(s): Author: Joseph Andrew Marcello Preface by: Dr G. Patrick Flanagan A landmark work in the field of sacred geometry and healing, the revelational new book, THE HEALING POWER OF PYRAMIDS, by Joseph Andrew Marcello, brings millennia of ancient insights together with stunning contemporary discoveries about the power of pyramids - as well as other energy forms - into one deeply-researched volume, soon to be available. With a special chapter by pyramid savant, Dr. Patrick Flanagan, on his astonishing life and work, late-breaking scientific data on spectacular Russian, Ukranian and international pyramid research, as well as a complete inclusion of mystic Paul Brunton's chapter, A Night in the Great Pyramid - documenting his encounter with both the forces of darkness and the messengers of light - THE HEALING POWER OF PYRAMIDS takes a quantum leap in bringing the art and science of energy-architecture into the 21st century, where it rightfully belongs, as a major venue and vehicle for enhancing human life and function on every level - from the physical to the metaphysical. THE HEALING POWER OF PYRAMIDS brings the world the welcome message that the implementation of these ancient wisdoms and modern scientific findings need not be beyond its reach, either physically or financially, and that pyramid power can be a living reality in the life of virtually any individual who cares to make it so; indeed, through the ready availability of easily procured and constructed titanium frame pyramids, and within mere moments, one can, so to speak, invite the Infinite Source-Field into one's life and space as an ongoing daily reality - with palpable positive results. THE HEALING POWER OF PYRAMIDS represents a quantum leap forward in the realms of pyramid energy research, featuring stunning medical and scientific documentation on the power of sacred Pyramid geometry to attract, magnify and radiate subtle higher forces from the cosmos and terrestrial broadcast energies for health, healing and spiritual empowerment. THE HEALING POWER OFPYRAMIDS reveals the living reality lying beneath the mysteries, legends and lore surrounding ancient cultures' reverence for pyramids as collectors and repositories of universal frequencies for the enlightenment and upliftment of the human race, with many chapters on pyramid healing, history, practice protocols, meditation, pet care and enhancement of water, food and supplements. THE HEALING POWER OF PYRAMIDS features new and cutting-edge revelations by the world's most committed explorers of Sacred Energies, including Dr. G. Patrick Flanagan, author of Pyramid Power and Beyond Pyramid Power, Nick Edwards, creator of sacred geometric structures, and Polish pyramid researcher and healer, Jarek Mironski. THE HEALING POWER OF PYRAMIDS unlocks the door to the Unknown, challenges longstanding and outworn 3-dimensional energetic paradigms that have governed scientific thinking for the past 5,000 years and open the path to a still untapped resource for enhancing human life on earth. THE HEALING POWER OF PYRAMIDS is the key to a new and better way of life.

Healing Back, a practical approach to healing common back ailments

The Reflexology Healing Handbook: Release Your Inner Energy with Your Fingertips to Relieve Pain, Reduce Stress and Promote Healing

Self-Healing Starts in the Brain Through Mind Power - Niculina Gheorghita

Back to the Child Within You. A Healing Game - Margareta Achitei