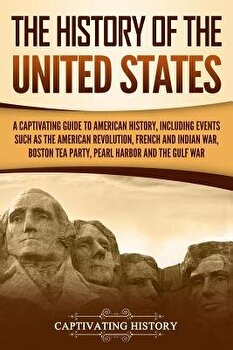 The History of the United States: A Captivating Guide to American History, Including Events Such as the American Revolution, French and Indian War, Bo, Paperback/Captivating History


If you want to discover the captivating history of the United States, then keep reading... When the first settlers reached the United States of America and started to chip out a living in the wilderness that seemed so fierce and unfamiliar to their European eyes, they could never have dreamed that someday the land upon which they stood would become one of the most powerful countries in the entire world. When Native Americans first witnessed those white sails bringing ships with white sailors into their world for the first time, they could never have dreamed that within a few centuries their population would be all but destroyed, that they would have to endure massacre after massacre, be stripped of their freedom and confined to comparatively tiny reservations, and walk the Trail of Tears within the next few hundred years. When the preachers of the Great Awakening stood on the backs of wagons or bits of old tree stumps and told the American people a new story of individual freedom and the power of ordinary people, they could never have dreamed that their preaching would trigger a landslide of abolitionism that would end in a civil war that almost tore the entire country apart. When the Civil War was finally won by the Union, and all African Americans' chains were broken at last, the military leaders could never have dreamed that within the next half century, the United States would emerge as one of the world's greatest military powers during the Spanish-American War. And when those soldiers won the struggle against Spain in Cuba, they could never have dreamed that later in the century, Cuba itself would turn against them and become the single greatest threat of nuclear annihilation during the Cold War. When the Wright Brothers first took to the air and Thomas Edison made the lightbulb, they could never have dreamed that American innovation would produce not only the Ford car, basketball, the telephone, and Facebook, but it would also be instrumental in creating the atomic bombs that killed hundreds of thousands of people and finally brought an end to the Second World War. As for Martin Luther King, Jr., he did dream. He had a dream of equality and brotherhood, and his dream at least partially came true in 2008 when America saw the inauguration of its first black president. Never could the slaves of the great plantations of the South have dreamed that that day would ever come, but it did. Nobody could have dreamed it, but it all came to pass, and it became the history of the United States of America. And this is how it all happened... In The History of the United States: A Captivating Guide to American History, Including Events Such as the American Revolution, French and Indian War, Boston Tea Party, Pearl Harbor, and the Gulf War , you will discover topics such as The People Who Were There First A Time of Exploration Colonizing America The French and Indian War The Boston Tea Party The American Revolution The First President Restless Times Horrors for the Natives Awakening Civil War Seeking for Peace A Rising Power Progress Disaster Strikes The Biggest Bomb in the World Icy Tension Freedom on the Home Front Terror and Its War And much, much more So if you want to learn more about the history of the United States, then scroll up and click the "add to cart" button

African American History: A Captivating Guide to the People and Events that Shaped the History of the United States

The Armies of the Night: History as a Novel / The Novel as History | Norman Mailer

Nature's Treasurehouse: A History of the Natural History Museum

Prisoners of History: What Monuments to the Second World War Tell Us about Our History and Ourselves