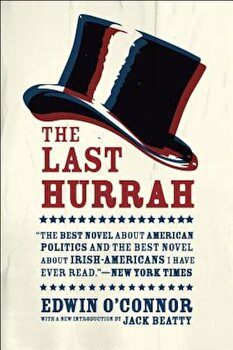 "We're living in a sensitive age, Cuke, and I'm not altogether sure you're fully attuned to it." So says Irish-American politician Frank Skeffington-a cynical, corrupt 1950s mayor, and also an old-school gentleman who looks after the constituents of his New England city and enjoys their unwavering loyalty in return. But in our age of dynasties, mercurial social sensitivities, and politicians making love to the camera, Skeffington might as well be talking to us. Not quite a roman a clef of notorious Boston mayor James Michael Curley, The Last Hurrah tells the story of Skeffington's final campaign as witnessed through the eyes of his nephew, who learns a great deal about politics as he follows his uncle to fundraisers, wakes, and into smoke-filled rooms, ultimately coming-almost against his will-to admire the man. Adapted into a 1958 film starring Spencer Tracy and directed by John Ford (and which Curley tried to keep from being made), Edwin O'Connor's opus reveals politics as it really is, and big cities as they really were. An expansive, humorous novel offering deep insight into the Irish-American experience and the ever-changing nature of the political machine, The Last Hurrah reveals political truths still true today: what the cameras capture is just the smiling face of the sometimes sordid business of giving the people what they want.