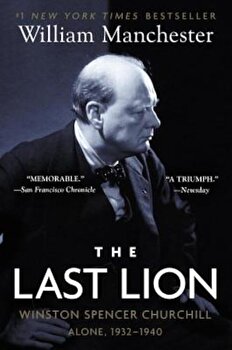 
In this powerful biography, the middle volume of William Manchester's critically acclaimed trilogy, Winston Churchill wages his defining campaign: not against Hitler's war machine but against his own reluctant countrymen. Manchester contends that even more than his leadership in combat, Churchill's finest hour was the uphill battle against appeasement. As Parliament received with jeers and scorn his warnings against the growing Nazi threat, Churchill stood alone--only to be vindicated by history as a beacon of hope amid the gathering storm. Praise for The Last Lion: Alone "Manchester has such control over a huge and moving narrative, such illumination of character . . . that he can claim the considerable achievement of having assembled enough powerful evidence to support Isaiah Berlin's judgment of Churchill as 'the largest human being of our time.'" -- The New Yorker "Memorable." -- San Francisco Chronicle "Stirring . . . As Manchester points out several times, it's as if the age, having produced a Hitler, then summoned Churchill as the only figure equal to the task of vanquishing him. The years Alone are the pivotal years of Churchill's career." -- The Boston Sunday Globe "The best Churchill biographyfor] this generation . . . Even readers who know the basic story will find much that is new." -- Newsweek "A triumph . . . equal in stature to the first volume of the series." -- Newsday "Vivid . . . history in the grand manner." --The Washington Post "Compelling reading." -- The Times (London)

Dominoes 3 NE The Last of the Mohicans

To love & to last/David Lapadat

To love & to last | David Lapadat