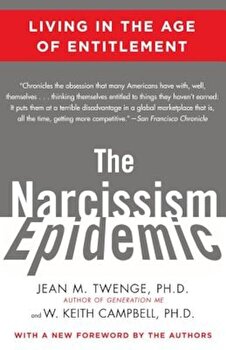 The Narcissism Epidemic: Living in the Age of Entitlement, Paperback/Jean M. Twenge


Narcissism--an inflated view of the self--is everywhere. Public figures say it's what makes them stray from their wives. Parents teach it by dressing children in T-shirts that say "Princess." Teenagers and young adults hone it on Facebook, and celebrity newsmakers have elevated it to an art form. And it's what's making people depressed, lonely, and buried under piles of debt. Jean Twenge's influential first book, Generation Me , spurred a national debate with its depiction of the challenges twenty- and thirty-somethings face in today's world--and the fallout these issues create for educators and employers. Now, Dr. Twenge turns her focus to the pernicious spread of narcissism in today's culture, which has repercussions for every age group and class. Dr. Twenge joins forces with W. Keith Campbell, Ph.D., a nationally recognized expert on narcissism, to explore this new plague in The Narcissism Epidemic , their eye-opening exposition of the alarming rise of narcissism and its catastrophic effects at every level of society. Even the world economy has been damaged by risky, unrealistic overconfidence. Drawing on their own extensive research as well as decades of other experts' studies, Drs. Twenge and Campbell show us how to identify narcissism, minimize the forces that sustain and transmit it, and treat it or manage it where we find it. Filled with arresting, alarming, and even amusing stories of vanity gone off the tracks (would you like to hire your own personal paparazzi?), The Narcissism Epidemic is at once a riveting window into the consequences of narcissism, a prescription to combat the widespread problems it causes, and a probing analysis of the culture at large.