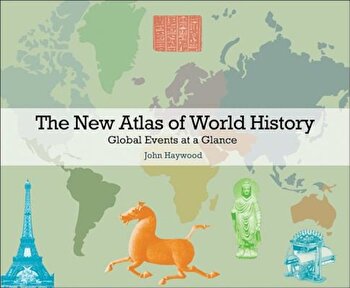 The New Atlas of World History: Global Events at a Glance, Hardcover/John Haywood


When did humans first inhabit different parts of the world? What was happening in China when Alexander the Great conquered the Persian Empire? What was the global reach of the great religions at the time of the Reformation in Europe? The New Atlas of World History is the first historical atlas to present global history in a series of uniform world maps, allowing at-a-glance comparison between different periods and regions. This stunningly illustrated atlas features 55 specially commissioned full-color maps that cover the whole of human history, from 6 million years ago to today. Accompanying 48 of the maps are detailed illustrated timelines that list important cultures, events, and developments. Maps and timelines also come with concise introductions that summarize notable historical and cultural changes, as well as striking graphic displays that present key data such as the world's five largest cities and total world population for the relevant year. An extensive glossary of peoples, cultures, and nations gives added depth to the maps and timelines. Ideal for quick reference or for an authoritative overview of the human story, The New Atlas of World History provides an unrivaled global perspective on pivotal moments throughout history, from the origins and distribution of early humans to the shifting balance of world power today. Enables at-a-glance comparison between different periods and regions Features 55 stunning full-color maps Includes 48 illustrated timelines, concise text, and an extensive glossary Traces the origins and spread of writing, trade, religion, and much more

New Atlantis: Musicians Battle for the Survival of New Orleans

The Wicked + The Divine - Volume 8: Old is the New New | Kieron Gillen