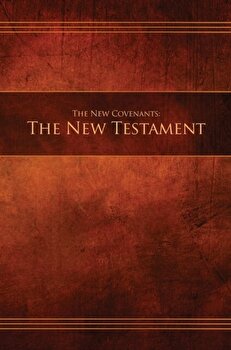 
As one of his most important works, Joseph Smith Jr. spent years making inspired clarifications to the Bible text; however, he was killed before it could be published. Here, for the first time, every known emendation that he wrote or taught has been assembled into the most complete version of Joseph Smith's New Translation of the Bible. In October 1831, Joseph Smith said "except the church receive the fullness of the scriptures that they would yet fall." From that time until his death in 1844, Joseph Smith worked diligently to prepare an edition of the Bible that could be received by the church, and in the process greatly expand the religious understanding of Christians and Christianity of his day. Using a unique spiritual gift, he inquired of God and received thousands of inspired corrections and clarifications, including many pages of text that had been long since removed from Genesis and other parts of the Bible. However, he was murdered before completing the work, and with the scattering of his notes following his death, it was never published in its entirety. Known at the time as the "fullness of the scriptures" and subsequently the "Inspired Version" or the Joseph Smith Translation (JST), portions of Joseph Smith's New Translation of the Bible were collected and published at various times, usually together with hundreds of alterations that were not the work of Joseph Smith. Because no single church, institution or collection had access to all of his journals, notebooks, papers and letters, his inspired work on the project was never gathered and published in a single edition, until now. Today, of the over 88 different English Bible translations available, this Restoration Edition of Joseph Smith's New Translation of the Bible stands alone as the most complete compilation of Joseph's work on this project. The text was carefully compiled and reviewed using all of Joseph's available verbal and written statements. Early Christian reforms, and the availability of the Holy Bible changed the world. But reform and translation alone could not, and cannot, restore lost knowledge or recover unaltered sacred texts. For that, inspiration and revelation from heaven itself is necessary. Joseph Smith answered the call. He was unequaled in his day as a leading religious figure, and his name has been held for both good and evil by Christians worldwide. These scriptures are a new witness of Christ and a sign of His invitation to renew communication with mankind. Religious scholars, students of religion, Christians and seekers of truth alike should prayerfully consider the greatly expanded views of God, his covenants, and his dealings with the human race that are available in this Restoration Edition of the Bible. The six (6) total books comprising the Restoration Edition of the scriptures include: VOLUME 1: THE OLD COVENANTS Part 1: The Old Testament, Genesis - 1 Chronicles Part 2: The Old Testament, 2 Chronicles - Malachi VOLUME 2: THE NEW COVENANTS Book 1: The New Testament Book 2: The Book of Mormon VOLUME 3: TEACHINGS & COMMANDMENTS Book 1: Teachings & Commandments Book 2: A Glossary of Gospel Terms This is Book 1 of Volume 2: The New Covenants. When combined with Book 2, The Book of Mormon, these constitute a single volume entitled The New Covenants, which accurately reflect the covenants that were established by Jesus Christ at Jerusalem as recorded in the New Testament, as well as in the New World at Bountiful, in the Americas. Topics covered in this volume include religion, spirituality, education, worship, devotion, faith, prayer, theology, protestant fundamentalism, mormonism, ethics, reformation, Jesus Christ, sacred scripture, latter days or end times, Paul, the Apostles, gospel truth, Jewish roots, and more.