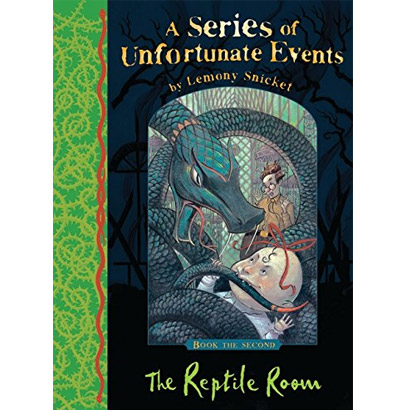 
Dear reader,There is nothing to be found in Lemony Snicket’s A Series of Unfortunate Events but misery and despair. You still have time to choose another international best-selling series to read. But if you insist on discovering the unpleasant adventures of the Baudelaire orphans, then proceed with caution…Violet, Klaus, and Sunny Baudelaire are intelligent children. They are charming, and resourceful, and have pleasant facial features. Unfortunately, they are exceptionally unlucky.In The Reptile Room the siblings endure a car accident, a terrible smell, a deadly serpent, a long knife, a brass reading lamp, and the re-appearance of a person they’d hoped never to see again.In the tradition of great storytellers, from Dickens to Dahl, comes an exquisitely dark comedy that is both literary and irreverent, hilarious and deftly crafted.Despite their wretched contents, A Series of Unfortunate Events has sold 60 million copies worldwide and been made into a Hollywood film starring Jim Carrey. And in the future things are poised to get much worse, thanks to the forthcoming Netflix series starring Neil Patrick Harris. You have been warned.

This is Not My Hat | Jon Klassen

Does a Kangaroo Have a Mother, Too? | Eric Carle

The Most Magnificent Thing | Ashley Spires

If I had a dinosaur | Gabby Dawnay

Once Upon a Magic Book | Lily Murray , Katie Hickey

The Princess who Hid in a Tree | Jackie Holderness