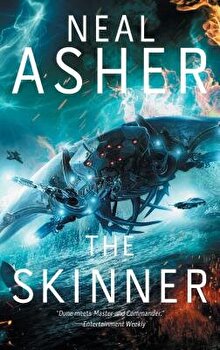 Description Three visitors arrive on one of the most unique (and deadly) worlds science fiction has ever seen, in the start of a classic Polity series from Neal Asher, reissued in mass market. Welcome to Spatterjay . . . where sudden death is the normal way of life. On the remote planet Spatterjay arrive three travelers: Janer, acting as the eyes of a hornet Hive mind; Erlin, a xenobiologist searching for an ancient sea captain; and Sable Keech, who himself has been dead for 700 years. On this ocean world, visitors are rare, and the native hoopers--humans infected with a local virus that renders them nearly invincible, though at monstrous cost--patrol the open seas, risking the voracious appetites of the planet's deadly wildlife. Somewhere out there is Spatterjay Hoop, the last member of a band of pirates, whose many years spent on the planet have transformed him into a grotesque monster. And a vicious alien prador is about to pay Spatterjay a visit as well, intent on extermination. As the visitors' paths converge, major hell is about to erupt in a chaotic waterscape where minor hell is already a remorseless fact of everyday life . . . and death. About the Author Neal Asher is a science fiction writer whose work has been nominated for both the Philip K. Dick and the British Fantasy Society awards. He has published more than twenty books, many set within his "Polity" universe, including Gridlinked , The Skinner , and Dark Intelligence . He divides his time between Essex and a home in Crete.