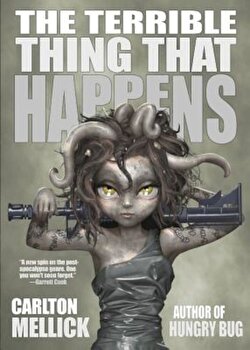 
There is a grocery store. The last grocery store in the world. It stands alone in the middle of a vast wasteland that was once our world. The open sign is still illuminated, brightening the black landscape. It can be seen from miles away, even through the poisonous red ash. Every night at the exact same time, the store comes alive. It becomes exactly as it was before the world ended. Its shelves are replenished with fresh food and water. Ghostly shoppers walk the aisles. The scent of freshly baked breads can be smelled from the rust-caked parking lot. For generations, a small community of survivors, hideously mutated from the toxic atmosphere, have survived by collecting goods from the store. But it is not an easy task. Decades ago, before the world was destroyed, there was a terrible thing that happened in this place. A group of armed men in brown paper masks descended on the shopping center, massacring everyone in sight. This horrible event reoccurs every night, in the exact same manner. And the only way the wastelanders can gather enough food for their survival is to traverse the killing spree, memorize the patterns, and escape the bloodbath before it's too late. From the godfather of bizarro fiction, Carlton Mellick III, comes an absurd horror story unlike anything you've read before.

You're About to Make a Terrible Mistake | Olivier Sibony

World War Two: A graphic account of the greatest and most terrible event in human history - Max Hastings