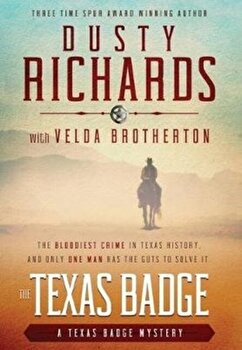 The bloodiest crime in Texas history, and only one man has the guts to solve it. Bank robbery. Jailbreak. massacre. Alone, any one of them would send good folks reeling. But when all three occur in the same night in the same small South Texas town leaving no eyewitnesses behind, it could be the end of the world. Saddler County Sheriff Dell Hoffman is charged with bringing the perpetrators of these horrific crimes to justice, but even the toughest and most cunning lawman in Texas has his limits. With nothing to go on but five bloody bodies, a cracked safe, and an empty jail, Dell works the fringes of his sleepy little western town--among the forgotten, the invisible, and those who often see without being seen. The more he learns, though, the more he wishes he could forget. In search of the truth, Dell finds himself pulled into a dark world of murder, deception, and brutality the likes of which he never imagined. Striking out on his own across the vast Texan prairie, he risks it all in search of justice. Will he solve the most heinous crime in Texas history? Or will Dell's drive for justice lead him to an even greater tragedy for both himself and those he cares for most?