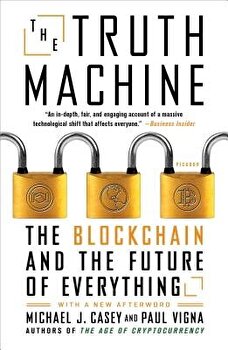 The Truth Machine: The Blockchain and the Future of Everything, Paperback/Paul Vigna


"Views differ on bitcoin, but few doubt the transformative potential of Blockchain technology. The Truth Machine is the best book so far on what has happened and what may come along. It demands the attention of anyone concerned with our economic future." --Lawrence H. Summers, Charles W. Eliot University Professor and President Emeritus at Harvard, Former Treasury Secretary From Michael J. Casey and Paul Vigna, the authors of The Age of Cryptocurrency , comes the definitive work on the Internet's Next Big Thing: The Blockchain. Big banks have grown bigger and more entrenched. Privacy exists only until the next hack. Credit card fraud is a fact of life. Many of the "legacy systems" once designed to make our lives easier and our economy more efficient are no longer up to the task. Yet there is a way past all this--a new kind of operating system with the potential to revolutionize vast swaths of our economy: the blockchain. In The Truth Machine , Michael J. Casey and Paul Vigna demystify the blockchain and explain why it can restore personal control over our data, assets, and identities; grant billions of excluded people access to the global economy; and shift the balance of power to revive society's faith in itself. They reveal the disruption it promises for industries including finance, tech, legal, and shipping. Casey and Vigna expose the challenge of replacing trusted (and not-so-trusted) institutions on which we've relied for centuries with a radical model that bypasses them. The Truth Machine reveals the empowerment possible when self-interested middlemen give way to the transparency of the blockchain, while highlighting the job losses, assertion of special interests, and threat to social cohesion that will accompany this shift. With the same balanced perspective they brought to The Age of Cryptocurrency , Casey and Vigna show why we all must care about the path that blockchain technology takes--moving humanity forward, not backward. About the Author: MICHAEL J. CASEY is a senior advisor at MIT Media Lab's Digital Currency Initiative and chairman of CoinDesk's advisory board. He is a former Wall Street Journal columnist and has authored four other books. PAUL VIGNA is a reporter at The Wall Street Journal . The Truth Machine is his third book.

Crash Override: How Gamergate (Nearly) Destroyed My Life, and How We Can Win the Fight Against Online Hate, Hardcover/Zoe Quinn

Understanding Cryptography: A Textbook for Students and Practitioners, Hardcover/Christof Paar

Honeypots for Windows, Paperback/Roger A. Grimes

Debriefing the President: The Interrogation of Saddam Hussein, Paperback/John Nixon

IT Governance. An International Guide to Data Security and ISO 27001/ISO 27002, Paperback/Steve Watkins

Click Here to Kill Everybody: Security and Survival in a Hyper-Connected World, Paperback/Bruce Schneier