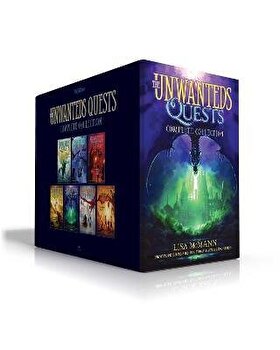 
The complete sequel series to the New York Times bestselling and award-winning Unwanteds series, about kids whose creative abilities give them magical powers, are now available in a collectible hardcover boxed set! Identical twins Fifer and Thisbe Stow have natural magical talent that is even greater than that of their brother Alex, head mage of Artimé. But their powers are dangerously uncontrollable. When Fifer and Thisbe accidentally strike down a beloved creature, Alex threatens to lock them away until they can master their abilities. The threat is forgotten, however, when the dragon Hux comes to Artimé seeking help for the land of dragons, which has been enslaved by the notoriously evil Revinir. Seeking a chance to right their wrong and escape their brother's wrath, Thisbe and Fifer, together with their friend Seth, sneak away to rescue the dragons from grave peril. From there a new adventure begins that will bring danger, shocking twists, and magical wonders for all the people of Artimé. This captivating hardcover boxed set includes the complete series: Dragon Captives Dragon Bones Dragon Ghosts Dragon Curse Dragon Fire Dragon Slayers Dragon Fury About author(s): Lisa McMann lives in Arizona. She is married to fellow writer and musician, Matt McMann, and they have two adult children. Her son is an artist named Kilian McMann and her daughter is an actor, Kennedy McMann. Lisa is the New York Times bestselling author of over two dozen books for young adults and children. So far she has written in genres including paranormal, realistic, dystopian, and fantasy. Some of her most well-known books are The Unwanteds series for middle grade readers and the Wake trilogy for young adults. Check out Lisa's website at LisaMcMann.com, learn more about The Unwanteds Series at UnwantedsSeries.com, and be sure to say hi on Instagram or Twitter (@Lisa_McMann), or Facebook (Facebook.com/McMannFan).