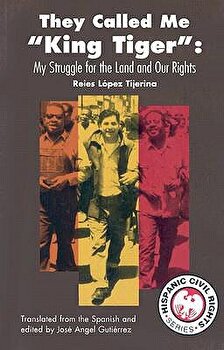 They Called Me King Tiger: My Struggle for the Land and Our Rights, Paperback/Reies Lopez Tijerina


Cultural Writing. Translated and edited by Jose Angel Gutierrez. All of the passion and commitment, as well as the flamboyant rhetoric of the 1960s, is preserved in this recollection of a life dedicated to a cause and transformed by continuous prosecution. Tijerina is the only member of a historical group of four Mexican-American Civil Rights activists to have penned his memoirs, perhaps in an effort to explain the trials and frustrations that brought him and his Federal Land-Grant Alliance members to break the law: reclaiming part of a national forest reserve as part of their inheritance; invading and occupying a courthouse, inflicting a gunshot wound on a deputy sheriff in the process; and challenging New Mexico and national authorities at every opportunity. But the acts that placed him in the most danger were also the ones that won the hearts and minds of many young Chicano activists.

The Gun Behind the Camera: A Cop's Experience of Thirty-Four Years in Merv Griffin's Television World, Paperback/Albert C. ace Miller

Together Through Life: A Personal Journey with the Music of Bob Dylan, Paperback/Chris Morris

TROUBLES AND TRIALS On Upper Buffalo Creek: Tales of Feuds, Shootouts, and Murders in Owsley County, Kentucky in the early 20th century and trials of, Paperback/Michael Dean

All Is Calm: A Maine Christmas Reader, Paperback/Shannon Butler

The Twisted Book Of Shadows, Paperback/James a. Moore

The Heart and the Abyss: The Life of Felice Benuzzi, Paperback/Rory Steele

Dante: The Poet, the Political Thinker, the Man, Paperback/Barbara Reynolds

Roads of the Roma. A PEN Anthology of Gypsy Writers, Paperback/***

A Cast-Iron Aeroplane That Can Actually Fly: Commentaries from 80 Contemporary American Poets on Their Prose Poetry, Paperback/Peter Johnson

How to Restore the Model a Ford, Paperback/Floyd Clymer

A Complete Life of Gen. George A. Custer, Hardcover/Frederick Whittaker

Thirty Years a Slave: From Bondage to Freedom: The Autobiography of Louis Hughes: The Institution of Slavery as Seen on the Plantation in th, Paperback/Louis Hughes

The Edinburgh Companion to Nonsense, Hardback/***

Shot in the Face: A Savage Journey to the Heart of Transmetropolitan, Paperback/Warren Ellis