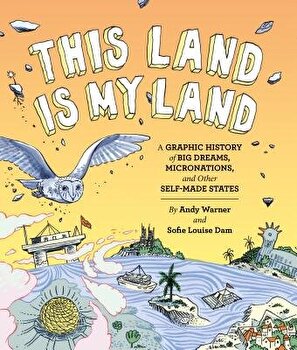 This Land Is My Land: A Graphic History of Big Dreams, Micronations, and Other Self-Made States, Paperback/Andy Warner


Description Tired of your country's bad politics? Feeling powerless to change things? Start your own utopia instead This nonfiction graphic novel collects the stories of 30 self-made places around the world built with a dream of utopia, whether a safe haven, an inspiring structure, or a better-run country. From the Gay and Lesbian Kingdom of the Coral Sea Islands to the Indian rock garden of Nek Chand, the micronation of Sealand to the pirate-founded, anti-slavery community of Libertatia, here are the empowering and eccentric visions of creators who struck out against the laws of their homelands, the approval of their peers, and even nature itself to reshape the world around them. About the author Andy Warner is the New York Times bestselling author of Brief Histories of Everyday Objects . He lives in San Francisco. Sofie Louise Dam is a cartoonist and illustrator based in Viborg, Denmark.

This Land Is Our Land | Suketu Mehta

Sinaia, land of the Elites. Architecture and history - Dan Manea