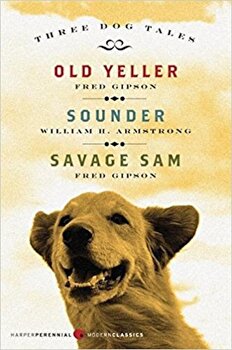 
Three classic dog tales brought together in a single volume Old Yeller Winner of the Newbery Honor When his father sets out on a cattle drive for the summer, fourteen-year-old Travis is left to take care of his mother, younger brother, and the family farm. In the wilderness of early frontier Texas, Travis faces his new and often dangerous responsibilities, with many adventures along the way, all with the help of the big yellow dog who comes to be his best friend. Sounder Winner of the John Newbery Medal Sounder is a loyal family dog, determined to help his owners through thick and thin. This is the story of a great coon dog and the poor sharecroppers who own him, and of the courage and love that bind a black family together in the face of extreme prejudice from the outside world. Savage Sam In this sequel to Old Yeller , Travis and his younger brother are kidnapped by an Indian raiding party, and Savage Sam, the son of the beloved yellow dog, leads a frantic chase to bring them back.

The Everything Dog Obedience Book : From Bad Dog to Good Dog

Boxset Dog Tricks and Treats: Baking for Your Dog

Puppy Love: A Book of Dog Lovers for Dog-Lovers