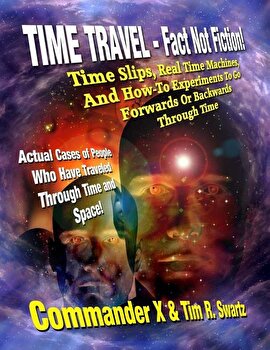 
Description EINSTEIN ONLY HAD PART OF THE EQUATION DOWN PAT ORDINARY PEOPLE HAVE TRAVELED BACKED AND FORTH THROUGH THE CORRIDOR OF TIME AND SPACE - AND THIS COULD BE YOUR OPPORTUNITY TO DO SO AS WELL. Up until recently it was thought that Einstein had revealed all there ever was to know about time and space and how we could never travel forward or backward in time without reaching the speed of light. Today those that have adopted the "string theory" of Physics have come to believe that everything in the universe exists at one time simultaneously. Retired Intelligence Operative Commander X and Emmy Award winning Tim R. Swartz have declared in this valuable book - written in easy to read terms - that we are not prisoners of Time and Space, but rather are prisoners of our physical bodies and the learned behaviors of existing in the material world. The Universe and its many mysteries await those who are not afraid to throw off the shackles of unawareness and begin the quest of exploration and learning. In TIME TRAVEL - FACT NOT FICTION , a vastness of relevant topics are reviewed and discussed logically, including: Spontaneous Cases of Time Travel -- People Caught In The Eddies Of Time -- An Encounter With Spirits -- Or A Brief Visit To The Past? -- The Mystery of Time Slips -- Doorways in Time -- People, Buildings and Towns From Beyond Time -- The Restaurant At The Edge Of Time -- Flight Into The Future -- Is Death a Jump in Time? -- Are UFOs Time Machines? -- The Philadelphia Experiment and the Montauk Project - Working Time Machines -- Nikola Tesla's Time Travel Experiments -- Human Time Machines -- Techniques for mental time travel -- UFOs and Time Distortion. Here also are actual cases of people who have traveled through time and space and returned to the "present" to relate their experience. We are on the cusp of a great new discovery of benefit to all of humankind if "powerful forces" do not prevent this vital information from being distributed to everyone.