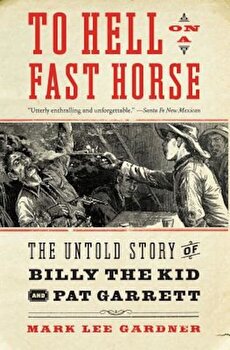 To Hell on a Fast Horse: The Untold Story of Billy the Kid and Pat Garrett, Paperback/Mark Lee Gardner


"So richly detailed, you can almost smell the gunsmoke and the sweat of the saddles. " --Hampton Sides, New York Times bestselling author of Ghost Soldiers No outlaw typifies America's mythic Wild West more than Billy the Kid. To Hell on a Fast Horse by Mark Lee Gardner is the riveting true tale of Sheriff Pat Garrett's thrilling, break-neck chase in pursuit of the notorious bandit. David Dary calls To Hell on a Fast Horse, "A masterpiece," and Robert M. Utley calls it, "Superb narrative history." This is spellbinding historical adventure at its very best, recalling James Swanson's New York Times bestseller Manhunt --about the search for Lincoln's assassin, John Wilkes Booth--as it fills in with fascinating detail the story director Sam Peckinpah brought to the screen in his classic film Pat Garrett and Billy the Kid.

Hell Is Round the Corner: The Unique No-Holds Barred Autobiography - Tricky

The Hell of it All - Charlie Brooker

hell is round the corner

The Hell of it All - Charlie Brooker

To Hell and Back

It's Dark And Hell Is Hot | DMX