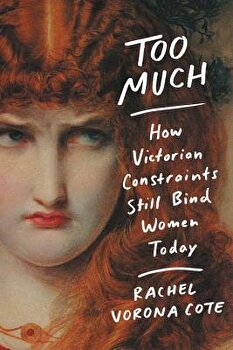 
Description Lacing cultural criticism, Victorian literature, and storytelling together, TOO MUCH explores how culture corsets women's bodies, souls, and sexualities--and how we might finally undo the strings. A weeping woman is a monster. So too is a fat woman, a horny woman, a woman shrieking with laughter. Women who are one or more of these things have heard, or perhaps simply intuited, that we are repugnantly excessive, that we have taken illicit liberties to feel or fuck or eat with abandon. After bellowing like a barn animal in orgasm, hoovering a plate of mashed potatoes, or spraying out spit in the heat of expostulation, we've flinched-ugh, that was so gross. I am so gross. On rare occasions, we might revel in our excess-belting out anthems with our friends over karaoke, perhaps-but in the company of less sympathetic souls, our uncertainty always returns. A woman who is Too Much is a woman who reacts to the world with ardent intensity is a woman familiar to lashes of shame and disapproval, from within as well as without. Written in the tradition of Shrill, Dead Girls, Sex Object and other frank books about the female gaze, TOO MUCH encourages women to reconsider the beauty of their excesses-emotional, physical, and spiritual. Rachel Vorona Cote braids cultural criticism, theory, and storytelling together in her exploration of how culture grinds away our bodies, souls, and sexualities, forcing us into smaller lives than we desire. An erstwhile Victorian scholar, she sees many parallels between that era's fixation on women's "hysterical" behavior and our modern policing of the same; in the space of her writing, you're as likely to encounter Jane Eyre and Lizzy Bennet as you are Britney Spears and Tori Amos. This book will tell the story of how women, from then and now, have learned to draw power from their reservoirs of feeling, all that makes us "Too Much." About the Author Rachel Vorona Cote publishes frequently in such outlets as the New Republic, Longreads, Pitchfork, Rolling Stone, Literary Hub, Catapult, the Poetry Foundation, Hazlitt, and the Los Angeles Review of Books, where her essay on Taylor Swift and Victorian female friendship was one of the site's most read essays in 2015. She was also previously a contributing writer at Jezebel. Rachel holds a BA from the College of William and Mary and was ABD in a doctoral program in English at the University of Maryland, studying and teaching the literature of the Victorian period. She and her husband live in Takoma Park, MD, just outside of Washington, D.C..