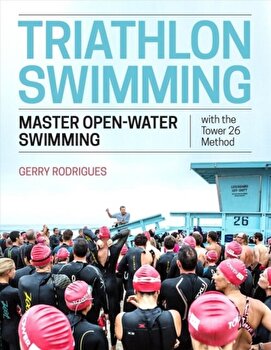 
In Triathlon Swimming , the world's leading open-water swimming coach, Gerry Rodrigues, reveals his rigorous method to mastering triathlon swimming technique. Triathlon swimming is different from pool swimming. Over his lifetime of over 100 open-water swim race wins and over 30 years of coaching, Rodrigues has studied the differences between pool swimming and open-water swimming technique. His famed Tower 26 swimming program, based in Los Angeles, reveals his method to triathletes and swimmers who shave minutes off their swim times in races. By training athletes both in the pool and in rough open water conditions, Rodrigues' Tower 26 athletes become master open-water swimmers who are skilled, confident, capable--and fast. Triathlon Swimming opens the Tower 26 method to you so you can gain the same skills and confidence for triathlons and open-water swimming events. Rodrigues breaks down open-water swimming technique and show how triathlon swimming requires different form. From kicking to sighting, Triathlon Swimming describes the best technique for swimming in open water. This guide shares the best gear for open water swimming, shows how to create your own effective open water swim workouts, and shares a plan for race prep and taper. Gerry Rodrigues and Tower 26 offer the best open-water swimming technique. By practicing this approach in Triathlon Swimming, you can become a master open-water swimmer for faster, fearless racing. About the Author Gerry Rodrigues is the guru of open-water swimming. As Head Coach of the prestigious Tower 26 swimming program based in Santa Monica, California, Rodrigues is the swimming technique expert behind top triathlon coaches like Matt Dixon (Purple Patch Fitness), Jim Vance, Rad Hallman (Head Coach, USC Triathlon), celebrity open-water swimmers, and many high-performing professional and age-group triathletes. Rodrigues grew up swimming off the Caribbean island of Trinidad, where he won many open-water ocean swimming races and earned an athletic scholarship to Pepperdine University. He won U.S. Masters Swimming national championships, set several U.S. and world masters swimming records, and has won over 100 open water swimming races. Rodrigues started coaching triathletes in the early 1980s, helped found the first triathlon club in Los Angeles and Team Malibu, and organized the Malibu Masters Swim Club. He cofounded the World Open Water Swimming Association and has managed and coached numerous swimming clubs and teams in Southern California and coached dozens of swimmers to top 10 national rankings, national championship wins, national and world records, and has coached Olympic gold medalists and world champions. Rodrigues was owner of SWIM Magazine and publisher of Swimming World and Swimming Technique magazines. He launched one of the world's earliest swimming websites, swiminfo.com in 1995. In 1992, Rodrigues was named U.S. Masters Swimming Coach of the Year. Emma-Kate Lidbury is a journalist and professional triathlete. She was coached by Gerry Rodrigues at Tower 26 during the peak of her racing career. She has won six Ironman 70.3 titles and has finished twice in the top 10 at the Ironman 70.3 World Championships. Originally from the UK, Emma-Kate began her journalism career in the British newspaper industry where she worked for several regional titles. She was assigned to cover the Blenheim Triathlon in 2005 and, after participating in the race, she was inspired to pause her journalism career to focus her attention on becoming a professional triathlete. She continued to work as a freelance writer in the endurance sports and triathlon space, writing for publications and websites around the world. She moved to the U.S. in 2013, landing in Santa Monica, California, where she joined Tower 26 and has since swum nearly 2,000 miles as part of the program. She now lives in Boulder, Colorado, with her husband Aaron and their mischievous puppy Indie.

Swimming For Triathlon And Open Water

Triathlon! : A tribute to the world's greatest triathletes, courses and gear

Swimming with Dali And Other Encounters with Artists