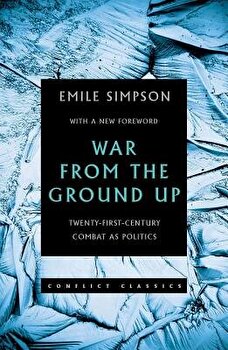 War from the Ground Up: Twenty-First Century Combat as Politics, Paperback/Emile Simpson


Contributor(s): Author: Emile Simpson As a British infantry officer in the Royal Gurkha Rifles Emile Simpson completed three tours of Southern Afghanistan. Drawing on that experience, and on a range of revealing case studies ranging from Nepal to Borneo, War From The Ground Up offers a distinctive perspective on contemporary armed conflict: while most accounts of war look down at the battlefield from an academic perspective, or across it as a personal narrative, the author looks up from the battlefield to consider the concepts that put him there, and how they played out on the ground. Simpson argues that in the Afghan conflict, and in contemporary conflicts more generally, liberal powers and their armed forces have blurred the line between military and political activity. More broadly, they have challenged the distinction between war and peace. He contends that this loss of clarity is more a response to the conditions of combat in the early wenty-first century, particularly that of globalisation, than a deliberate choice. The issue is thus not whether the West should engage in such practices, but how to manage, gain advantage from, and mitigate the risks of this evolution in warfare. War From The Ground Up draws on personal experience from the frontline, situated in relation to historical context and strategic thought, to offer a reevaluation of the concept of war in contemporary conflict. SHORTLISTED FOR THE ROYAL UNITED SERVICES INSTITUTE DUKE OF WESTMINSTER MEDAL FOR MILITARY LITERATURE 2013.