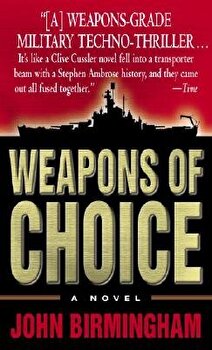 On the eve of America's greatest victory in the Pacific, a catastrophic event disrupts the course of World War II, forever changing the rules of combat. . . . The impossible has spawned the unthinkable. A military experiment in the year 2021 has thrust an American-led multinational armada back to 1942, right into the middle of the U.S. naval task force speeding toward Midway Atoll--and what was to be the most spectacular U.S. triumph of the entire war. Thousands died in the chaos, but the ripples had only begun. For these veterans of Pearl Harbor--led by Admirals Nimitz, Halsey, and Spruance--have never seen a helicopter, or a satellite link, or a nuclear weapon. And they've never encountered an African American colonel or a British naval commander who was a woman and half-Pakistani. While they embrace the armada's awesome firepower, they may find the twenty-first century sailors themselves far from acceptable. Initial jubilation at news the Allies would win the war is quickly doused by the chilling realization that the time travelers themselves--by their very presence--have rendered history null and void. Celebration turns to dread when the possibility arises that other elements of the twenty-first century task force may have also made the trip--and might now be aiding Yamamoto and the Japanese. What happens next is anybody's guess--and everybody's nightmare. . . . About the Author: John Birmingham is the author of Emergence, Resistance, Ascendance, After America, Without Warning, Final Impact, Designated Targets, Weapons of Choice, and other novels, as well as Leviathan, which won the National Award for Nonfiction at Australia's Adelaide Festival of the Arts, and the novella Stalin's Hammer: Rome . He has written for The Sydney Morning Herald, Rolling Stone, Penthouse, Playboy, and numerous other magazines. He lives at the beach with his wife, daughter, son, and two cats.