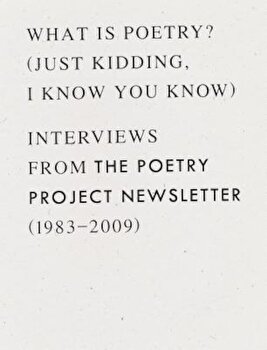 What Is Poetry' (Just Kidding, I Know You Know): Interviews from the Poetry Project Newsletter (1983 - 2009), Paperback/Anselm Berrigan


The Poetry Project at St. Mark's Church was founded in 1966 for the overlapping circles of poets in the Lower East Side of New York. These interviews from The Poetry Project Newsletter form a kind of conversation over time between some of the late 20th century's most influential poets and artists, who have come together in this legendary venue over the past 50 years. Includes interviews with Charles North, Anne Waldman, Bernadette Mayer, David Rattray, Allen Ginsberg, Kenneth Koch, Harryette Mullen, Barbara Henning, David Henderson, Lisa Jarnot, Alice Notley, Ed Sanders, Samuel Delany, Harry Matthews, Victor Hernandez Cruz, Renee Gladman, Lorenzo Thomas, Fred Moten, Stan Brakhage, Alex Katz, Lewis Warsh, Ron Padgett, Maggie Nelson, Wayne Koestenbaum, Eileen Myles, and more. -I find it one of the liveliest points of communication in the American poetry world. There is an incredible excitement to come to the church and read one's poems to the many other poets who congregate there, drawn to the church by its own energy and thrust.---Donald Hall From the introduction, by Anselm Berrigan: For the poets closely involved with the Poetry Project since, and subsequent to, its inception, the interviews were an opportunity to speak directly to a community one could perceive as known, imaginary, expanding, unwieldy, intermittent, formative, desperately necessary, and sometimes peculiarly unsatisfying all at once. Community being the kind of term that often implies everything and nothing simultaneously, with the bottom falling out of the word depending on who happens to be wielding it. Poets can be particularly adept at using and exposing such terms.